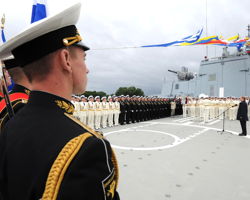 The public removal of a fleet commander over readiness issues is an indicator of a defense establishment taking readiness very seriously.