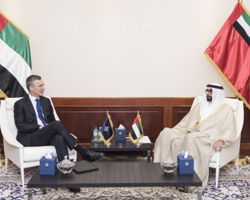 The eleventh installment of the NATO Summit Special Series on the United Arab Emirates and the potential for deepened cooperation with the Alliance.