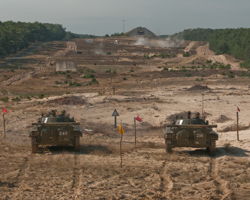 The tenth installment of the NATO Summit Special Series on Slovakia and the disconnect between verbal commitments and practical steps.