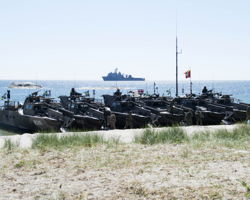 The eighth installment of the NATO Summit Special Series covering Finland and Sweden and the potential for a new chapter in their cooperation with the Alliance.