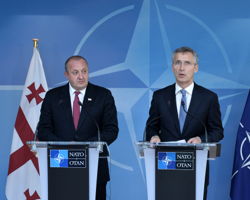 The seventh installment of the NATO Summit Special Series covering Georgia and its continued path toward membership.