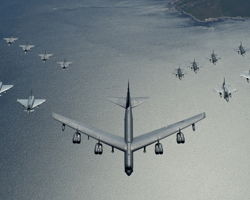 The sixth installment of the NATO Summit Special Series covering Denmark and Sweden’s priorities for the Warsaw Summit.