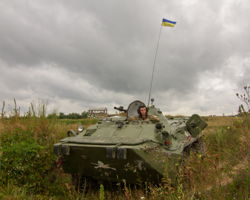 The fourteenth installment of the NATO Summit Special Series on Ukraine and its expectations of reassurance in Warsaw.