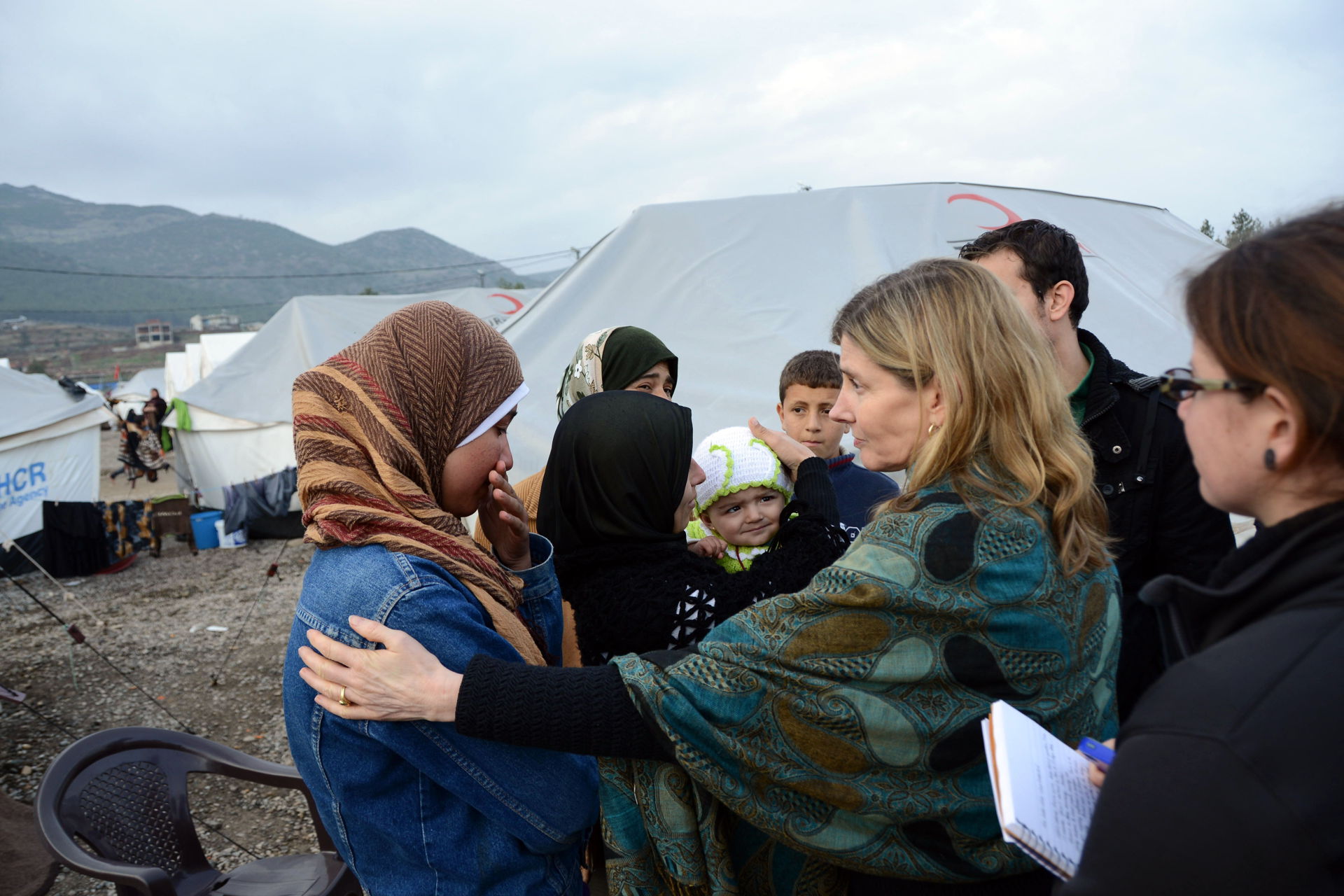 In early 2012, Syrian activists had a running joke about then-NATO chief Anders Fogh Rasmussen: When will he next say that NATO has “no intention whatsoever” of taking action in Syria?

Syrians risked their lives to hold protests for a Libya-style no fly zone in October 2011, but NATO responded by repeatedly ruling out such a measure as the Assad regime’s massacres escalated.

Four years after NATO repeatedly ruled out action in Syria, many of the original protesters from the 2011 movement are dead, jailed, or displaced, and hundreds of airstrikes by pro-Assad forces have reduced their hometowns to ruins. Many now risk their lives by the thousands, not to protest for a no-fly zone in Syria, but to escape the misery of Syria aboard flimsy dinghies bound for Europe. Meanwhile, US and European inaction has “emboldened” Russian President Vladimir Putin to intervene in Syria more directly.

Moderate anti-Assad rebels, who depend on American and European support, have suffered catastrophic defeats following Russian intervention. The Levant Front, which pushed ISIS out of Aleppo City in 2014, has lost most of its territory due to a blistering Russian air campaign. In nearby Latakia, the First Coastal Division has lost nearly half of its territory to a pro-regime offensive that included Russian ground troops. And on the southern front, the largest Free Syrian Army coalition in the country, also ceded a crucial supply-line town in January as a result of Russian airstrikes.

According to the Syrian Network for Human Rights, Russian airstrikes are killing civilians at a faster rate than either Assad or ISIS. Russia is now escalating its attacks on northern Syria by tripling the number of airstrikes over the past few days. It’s warplanes took part in a market massacre over the weekend in northern Syria leaving 40 dead.

The exodus from eastern Aleppo City provides a case study. Four years ago, the opposition-held eastern Aleppo neighborhoods boasted a population of 1.2 million. But the Assad regime initiated massive aerial bombardments on civilian areas, shrinking the population in eastern Aleppo to roughly 300,000 people by February 2016. After a fierce Russian-backed offensive this February, a further 40,000 civilians fled Aleppo within hours.

Assad forces and Russian forces themselves have also been deliberately targeting displaced persons’ camps in Syria for months, rendering these camps almost as dangerous as the battles from which the displaced fled. With unsafe and overburdened camps inside Syria, over 4.8 million Syrians have sought refuge outside of Syria. A majority of them go to Turkey, NATO’s southern pillar, which is just north of Aleppo and is by far the largest Syrian-refugee-receiving country. Many keep going and make their way toward Europe, triggering enormous consequences for Europe’s political landscape.

General Philip Breedlove, NATO’s top military commander, said in March that Russia was “weaponizing refugees” by utilizing refugees flows to destabilize Europe. Political scientist Kelly Greenhill has documented at least 56 attempts to “weaponize” migration since 1951. We  cannot fault refugees for attempting to escape their war-torn homes for Europe, but we must also recognize that Russia’s “weaponization” strategy has been wildly successful. Far-right political parties in Europe have been buoyed by a xenophobic backlash against refugees. They threaten to divide Europe, and, worryingly, many have close ties to Russia. Such ties come at NATO’s expense.

In France, the far-right Front National scored a historic victory by winning the first-round vote in December. In Germany, the far-right Alternative für Deutschland shocked prognosticators with gains in three state elections in March. In Austria, just last month, Austrian National Front leader Norbert Hofer came within one percentage point of becoming the first far-right head of state in the European Union since the end of World War II. The surging far-right parties in all of these cases are anti-immigrantion, anti-EU, and favor closer ties to Russia. Furthermore, with only nine days until the British-EU referendum, the “leavers” have been surging in the polls following the release of the latest immigration statistics two weeks ago.

NATO will be undermined at its foundations if key EU nations continue to turn against European unity and to drift toward Russia. In many ways, the crisis the European Union finds itself in today started when European leaders decided to wash their hands of responsibility in Syria. That NATO continues to do so shows it has still not learned.

In October 2015, less than a week after Turkey complained of Russian violations of its airspace from Syria, the United States removed its Patriot anti-aircraft missiles from Turkish soil. These Patriot missiles were proposed as a possible option to enforce a no-fly zone in northern Syria. When Turkey downed a Russian plane in its airspace the following month, NATO offered only lukewarm diplomatic support and sat idle as Russian airstrikes decimated the Levant Front and First Coastal Division right on Turkey’s border. Russia then pressed on: it escalated air incursions in the Baltics; denied that “NATO airspace” even exists; began “buzzing” U.S. warships at sea; and threatened missile attacks on Romania and Poland. Russia’s involvement in Syria has spilled over into other spheres of NATO members’ territory.

I have already written at length about the dangers of inaction in Syria from an American perspective. The United States must do more to stop the killing in Syria, and NATO must be a part of these efforts. Yet the constant European refrain that “we cannot wrestle with the Russian bear” can no longer be acceptable. It is Europeans, not Americans, who are most at risk of terror attacks by homegrown extremists inspired by ISIS in Iraq and Syria – although, as Saturday’s tragic massacre in Orlando, Florida indicates, Americans are hardly immune to these trends.

Furthermore, concrete steps could be taken by both the United States and many European militaries. The French and British took the lead in establishing the no-fly zone in Libya, the likes of which, if applied in key areas of Syria, would probably induce many refugees to return. Assad forces have also used starvation as a tool for displacement, but multiple European countries possess the capabilities to end the practice through humanitarian airdrops.

Even providing moderate rebels with solid and steady supplies of artillery would send a message to Russia that could reduce Russian aggression in Syria and beyond. The hardline Jaish al-Fatah rebel coalition, which receives such supplies, has dealt a string of defeats to regime forces in recent weeks despite Russia’s intervention. Russian forces in Syria are not invincible; providing similar support to moderate rebels would help tamp down extremism and invigorate the anti-ISIS fight.

NATO should no longer allow its fears of “wrestling the Russian bear” to excuse inaction in Syria. Europe is already wrestling the Russian bear in Syria, though not all Europeans realize it. If Americans and Europeans do not act soon to protect Syrian civilians and counter Russia’s weaponization of refugees, Europe may be wrestled to the mat. It’s long past time for NATO to begin offering real support to moderate Syrian rebels and real civilian protection from regime and Russian bombardments. If America refuses to act, Europe should act alone.

Mohammed Alaa Ghanem is the director of government relations and a senior political adviser at the Syrian American Council @MhdAGhanem. Photo credit: US Department of State.