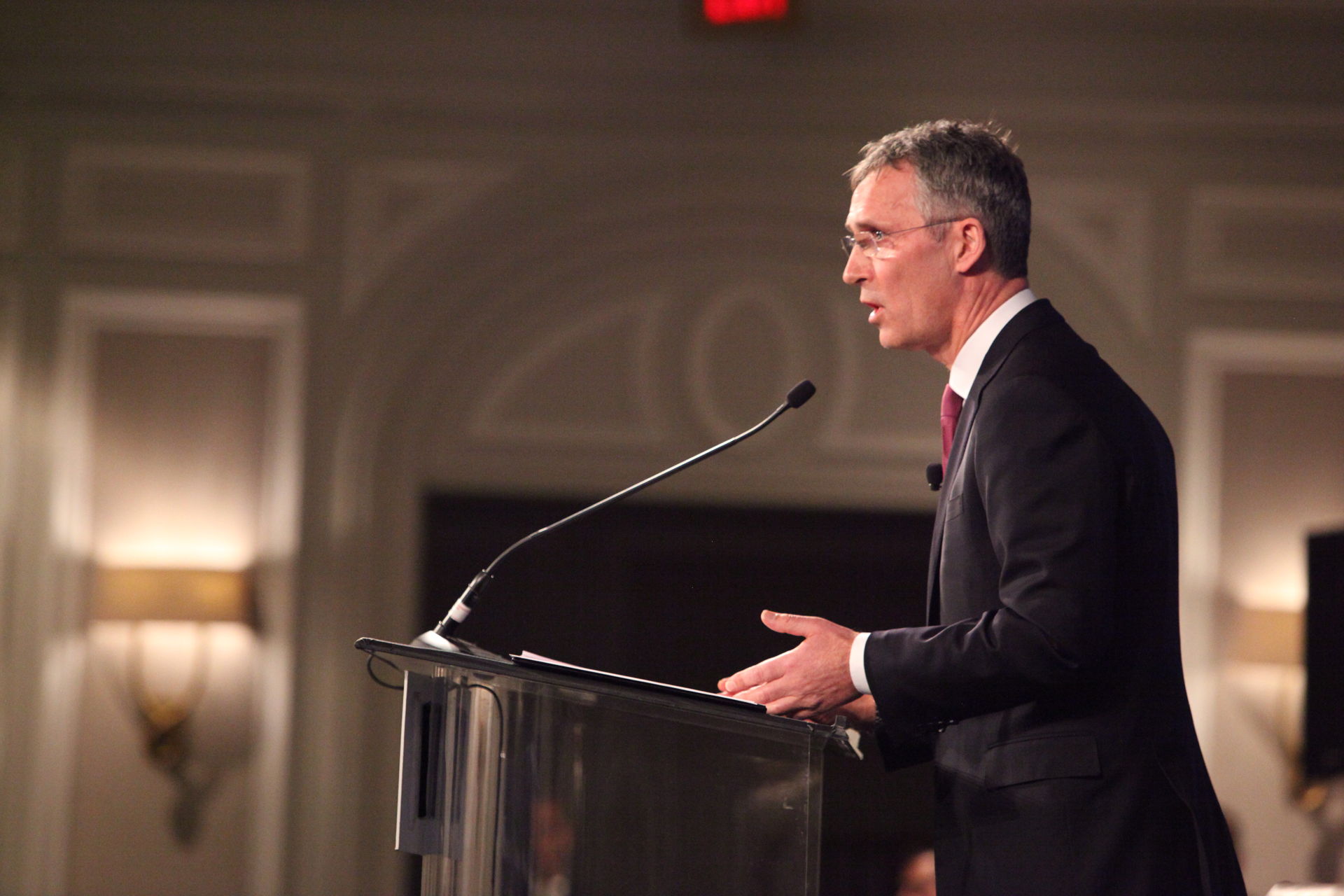 NATO Secretary General Jens Stoltenberg refused to wade into US domestic politics, but he delivered a forceful defense of the Alliance on April 6 in remarks that may be interpreted as a firm rebuttal to Republican presidential frontrunner Donald Trump’s criticism of the grouping as“obsolete.”

Noting that the mutual interests of the United States and Europe are best served by a strong North Atlantic alliance, Stoltenberg said: “Without NATO, transatlantic cooperation would be weaker, Europe and North America less safe, and the world a more dangerous place.”

Describing the security of Europe and North America as “indivisible,” he said that “only by standing together will we remain safe and secure.” Stoltenberg spoke at an event hosted by the Atlantic Council at the Ritz-Carlton hotel in Washington.

NATO’s Secretary General contended that the bonds of the transatlantic alliance had “carried us through the Cold War” and that security, prosperity, and open society would be at greater risk without NATO. “A safer, stronger Europe means a safer and stronger United States,” he said. “That was the rationale behind the decision to create the Alliance and it is just as valid today.” April 4 marked the sixty-seventh anniversary of NATO’s founding.

This was a theme that Stoltenberg has reprised over the course of his visit to Washington, a visit that comes on the heels of Trump’s criticism of NATO. In his meeting with Stoltenberg at the White House on April 4, US President Barack Obama described NATO as “the lynchpin, the cornerstone of our collective defense and US security policy.”

Stoltenberg said in his remarks at the Atlantic Council event that it was because NATO is “as much an American organization as it is a European one” that the Alliance, for the first and only time in its history, invoked Article 5 of the Washington Treaty—which treats an attack against one member of the Alliance as an attack against all—and invaded Afghanistan after al Qaeda attacked the United States on September 11, 2001. Hundreds of thousands of European, Canadian, and NATO partner country troops served alongside US forces in that operation.

In his introductory remarks, Frederick Kempe, Atlantic Council President and CEO, noted Trump’s criticism of NATO had in fact focused American attention on the importance of the Alliance.

Trump has suggested that the United States scale down its contributions to NATO. He said he wouldn’t care if the Alliance fell apart. He has also accused other members of “not paying their fare share” in comparison with the United States. “That means we are protecting them, giving them military protection and other things, and they’re ripping off the United States. And you know what we do? Nothing,” Trump said at a recent campaign rally, according to the New York Times.

NATO’s European members have also taken important steps toward fulfilling a pledge to spend two percent of their GDP on defense. As a result, defense cuts have been halted and defense spending stepped up. “I am determined that all allies make good on that pledge because the burden must rest on all our shoulders,” said Stoltenberg. Last year, sixteen European allies spent more on defense than in the previous year.

Following his remarks, Stoltenberg participated in a discussion that was moderated by Washington Post correspondent Karen DeYoung.

In his address, Stoltenberg laid out three key priorities for NATO: first, to enhance its ability to train, advise and assist local forces; second, to increase its support for the Iraqi government; and third, to ramp up cooperation with regional partners such as the Gulf Cooperation Council.

He said current needs in Afghanistan and potential needs in Libya have made it clear that the demand for NATO to build its capacity is only growing, which is why NATO needs to make training a core capability for the Alliance.

Laying the ground for a potential NATO role in Libya—where ISIS has put down roots in a dysfunctional environment that has until recently seen the country divided between two rival governments—Stoltenberg said Libya will need all the help it can get and that the Alliance is ready to step up.

This week, a United Nations-backed unity government, headed by Prime Minister Fayez Sarraj, has sought to consolidate control in Tripoli a week after arriving in the Libyan capital. The Islamist-backed administration that previously controlled Tripoli announced that it was stepping down on April 6. A rival House of Representatives, based in the eastern city of Tobruk, has yet to endorse the Sarraj government.

A hint of the scope of a potential NATO role in Libya was provided when US warplanes conducted airstrikes on an ISIS base on the outskirts of the western Libyan city of Sabratha on February 19. With a unity government now in place, Western officials have indicated that operations similar to the one in Sabratha may be conducted if sought by the new government in Tripoli.

Emphasizing the importance of military action to defeat and destroy ISIS, Stoltenberg said it was important to train others to fight. While NATO is not part of the US-led anti-ISIS coalition in Syria and Iraq, some of its members are.

“In the fight against terrorism, building local capacity is one of the best weapons we have, and the earlier we can do it, the better,” Stoltenberg said, “because a few months can mean the difference between a fragile state and a failed state.”

“While NATO has to remain an expeditionary alliance, able to deploy forces outside our territory, NATO must also become a more effective training alliance,” he added.

Toward this end, NATO is building capacity and training troops in Afghanistan, Georgia, Moldova, and Jordan. It will soon provide counterterrorism advice to Tunisia and help improve the capacity of its armed forces. Stoltenberg said there is an urgent need to support Iraqi Prime Minister Haider al-Abadi’s government. One of the areas in which NATO can assist is in dealing with improvised-explosive devices (IEDs) in Iraq, he said.

Advocating greater cooperation between NATO and regional partners such as the GCC, he said: “To project stability in the region, we need to work with those who know the region best.”

On this front, NATO can share with the GCC its expertise in building and maintaining an integrated military structure, and the two organizations can explore ways to enhance cooperation on counterterrorism, energy and maritime security, and cyber defense, he added.

Standing up to Russia

In a bid to reassure its NATO allies in Europe’s east, the Obama administration announced in February that it intends to quadruple US military spending in Europe. “We continue to provide reassurance to the frontline states there, our NATO allies, to make sure that they have not just reassurance of words, but that we have actually deployed concrete assets that let them know that Article 5 means something, and that we stand by our commitments to our allies,” Obama said at the White House this week.

Stoltenberg said that while Russia does not pose an imminent threat to any NATO ally, including the countries in the eastern part of the Alliance, it has become more assertive. Russia under President Vladimir Putin, in an attempt to re-establish a sphere of influence around its borders, is “willing to use military force…to intimidate neighbors, to change borders in Europe, annex Crimea, destabilize eastern Ukraine, and having troops in Georgia and Moldova and so on,” he added.

In response to Russia’s 2014 annexation of Crimea and subsequent support for separatists in eastern Ukraine, NATO has become “more agile and better prepared,” and its Response Force is three times bigger, the Secretary General said.

However, he noted, NATO is not seeking a confrontation with Russia. “We will avoid a new Cold War,” he said, adding that NATO is striving toward a more cooperative relationship with Russia, but it has to be firm to establish the basis for political dialogue.

The NATO-Russia Council has not met since 2014 when the Alliance broke off practical cooperation with Moscow in response to Russia’s violation of Ukrainian territorial integrity. However, the Alliance wants to talk to Moscow about improving military transparency with the goal of avoiding misunderstandings.

Stoltenberg, a former Norwegian Prime Minister, said there was no contradiction between strong defense and political dialogue. “For me, dialogue is not an expression of weakness, it is an expression of strength,” he said. “In the long run, Russia has to understand that they will gain more from cooperating with us instead of confronting us.”

“For me, dialogue is not an expression of weakness, it is an expression of strength,” NATO Secretary General Jens Stoltenberg said of engagement with Russia. He spoke in a conversation moderated by Washington Post correspondent Karen DeYoung (right). (Atlantic Council/Victoria Langton)

NATO will host its annual summit in Warsaw in July. At that summit, the Alliance will take additional decisions on strengthening its collective defense and deterrence, advance the forward presence of multinational forces in its east, enhance its resilience against hybrid warfare and cyber threats, and ensure that the nuclear component of its deterrence is credible and effective, Stoltenberg said.

“We will advance our goal of a Europe whole, free and at peace, with Montenegro invited to join our Alliance,” he added.

While Obama announced in October of 2015 that he will keep 5,500 US troops in Afghanistan into 2017, other NATO members have yet to take a decision on troop numbers. That decision will be made in Warsaw as will a decision on ways to address the challenge posed by ISIS, said Stoltenberg.

Ashish Kumar Sen is a staff writer at the Atlantic Council.